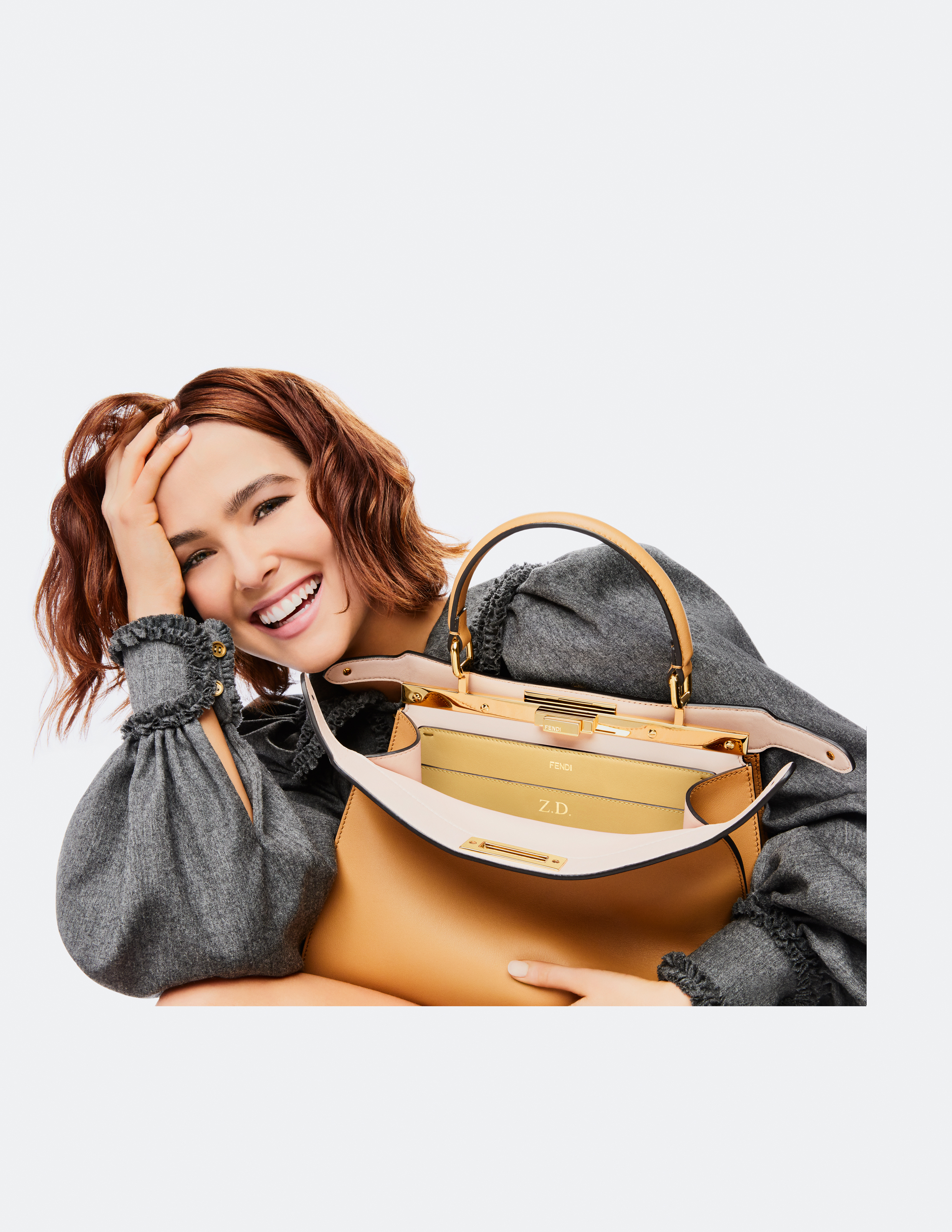 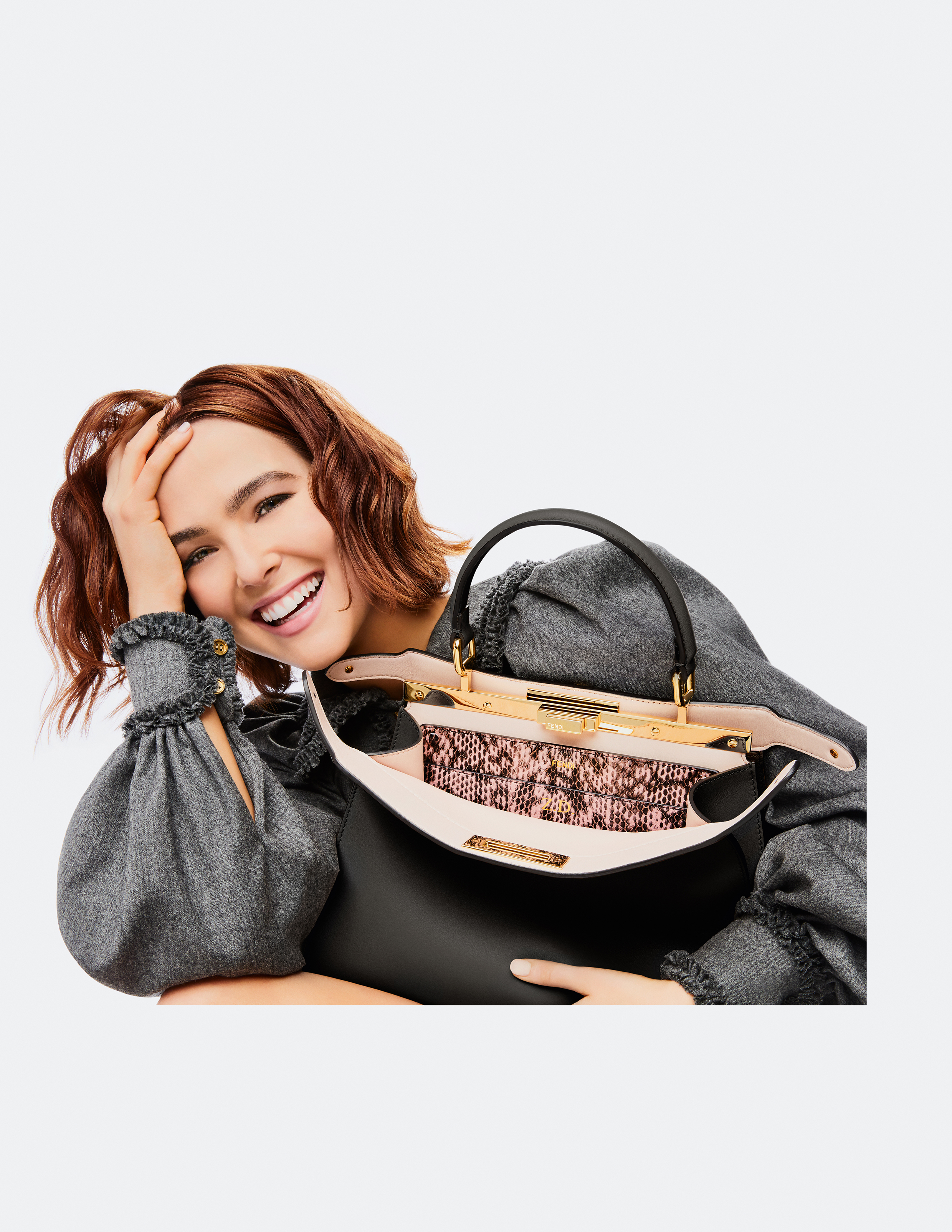 FENDI launches its first ever worldwide video and image campaign in honor of its iconic bag, the Peekaboo, featuring actress and producer Zoey Deutch.

The campaign highlights the emotional relationship between the Peekaboo and Zoey, celebrating her most authentic, intimate, true inner self.

The story unfolds as Zoey on set is embracing her Peekaboo, revealing its inside while her own personality shines. Her inner soul appears, along with the inside of the Bag itself: the story follows her, cut into a short, chronological sequence that leads the viewer into the moment when she seats in the studio – ready to be photographed with the FENDI Peekaboo.

The soundtrack song I See You by The Horrors flaunts Zoey’s bold, eccentric, energetic personality, magnifying the magic relationship between her and the Peekaboo.

Presented for the FENDI Fall/Winter 2020-21 Collection last February, the new Peekaboo features a new accordion-frame shape, to open in a deep ‘smile’ featuring inside pockets which can be interchangeable in smooth leather or precious skins and personalized with one’s initials.

Since its creation for Spring/Summer 2009, Silvia Venturini Fendi has combined the Maison’s savoir- faire and limitless creativity with the research for high-quality materials and details, giving life to infinite versions of the Peekaboo that – each one with its standout and distinctive features – all flawlessly embody the versatile and timeless aspect of this bag that has been and will continue to be elevated, reinterpreted and declined season after season, collection after collection.

The campaign is set to launch globally from the end of July in print issues and online, while the new Peekaboo bag will hit stores from late august.


ABOUT FENDI
The house of FENDI was established by Adele and Edoardo Fendi in Rome in 1925. The opening of the first FENDI boutique – a handbag shop and fur workshop followed. Soon winning international acclaim, FENDI emerged as a brand renowned for its elegance, craftsmanship, innovation and style. The collaboration with Karl Lagerfeld began back in 1965 and in 1992 Silvia Venturini Fendi seconded him in the creative direction. In 1994 she was given responsibility of leather goods accessories and then the direction of the kidswear and menswear lines. In 2000 the LVMH Group acquired FENDI becoming in 2001 its majority shareholder. Today FENDI is synonymous with quality, tradition, experimentation and creativity.

ZOEY DEUTCH
A vibrant and diversely talented actress, Zoey Deutch is steadily building on her body of work with dynamic roles alongside notable actors and filmmakers. Zoey just wrapped production on the second season of Ryan Murphy’s Golden Globe- nominated Netflix series The Politician, which will release June 19th. She can most recently be seen starring in the independent feature Buffaloed for Magnolia Pictures, which she also produced. Next up, Zoey is set to star in and executive produce Most Dangerous Game for Netflix alongside Glenn Powell. This romantic comedy will be a spiritual sequel to the pair’s hugely successful Netflix film Set It Up. Last fall, Zoey starred alongside Jesse Eisenberg, Woody Harrelson and Emma Stone in the Ruben Fleischer-helmed Zombieland-Double Tap for Sony. Prior to that, Zoey starred in Max Winkler’s independent feature Flower, which premiered at the 2017 Tribeca Film Festival and garnered her rave reviews for her performance. Additional film credits include Ry Russo-Young’s Before I Fall, Richard Linklater’s Everybody Wants Some!!,

Danny Strong’s Rebel in the Rye, and The Year of Spectacular Men, which Deutch also produced, among many others. Currently, Zoey is voicing the leading role and producing a scripted podcast for Audible. Zoey is also committed to several charitable causes and organizations.
Share this: